Last week, we touched down in Cali, Colombia. After an hour and a half drive through the lush countryside, we arrived in Roldanillo. We first learned about the paragliding in Colombia a year earlier from another pilot in Santa Barbara. They described it as their favorite place to fly. Even standing on launch, we learned why. The mountains were covered with banana and coffee farms, the valley was populated by sugar cane fields, and the conditions for flying were ideal.

There was a predictable house thermal that allowed pilots to travel cross-country around the valley. The air was buoyant, the lift was smooth, and landing zones were everywhere. 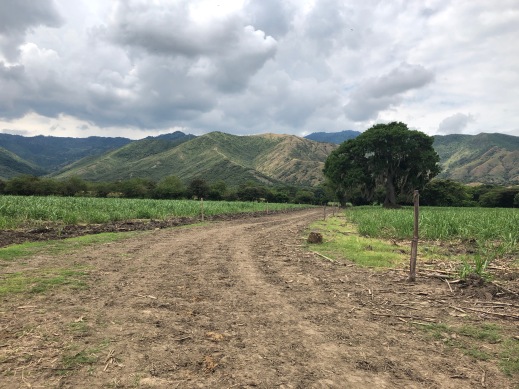 The flying in Colombia is much different than the site where we learned to fly, Aspen, Colorado, which is high altitude, low wind, and much less forgiving than the conditions in Roldanillo.

Outside of the flying, Roldanillo is a vibrant town. The people are friendly and welcoming, there are several great spots to eat, and it is very affordable. A full lunch with soup and juice was only $2.50.

But there was one part of flying in Roldanillo that was stressful, and it comes with every popular place to fly: other pilots. There were about fifty other pilots on a small launch, one taking off shortly after another. This did not include the competition launching from another hill close by.

Out of all of the pilots around us, it seemed like every other pilot had a sketchy launch. On the first day, the pilot in front of me slammed back into the hill attempting to take off. He didn’t correctly clear his brake lines, and one was wrapped completely around his risers. His sloppy preparation possibly led to serious harm or death.

Standing there, watching other pilots wrestle their gliders into the air, made me realize how valuable it is to learn in a place like Aspen. We’ve had the privilege of learning around only great pilots. Even though Aspen’s conditions are unforgiving, I felt more confident flying there than in Roldanillo. At one site, I’m surrounded by great pilots who practice safe flying habits, and the other is crowded with lots of pilots, some of which might be flying with poor technique or lack of awareness.

Learning around masters of the sport helped us hone our skills, and learn control and safety. Our launches became smooth and composed because we were surrounded by pilots who had their launches dialed in.

Over time, I’ve learned that paragliding isn’t the only area where it is good to be surrounded by masters. You are shaped by those around you, so it is important to find those who lift you up.

If everyone around you is sloppy, unintentional, and employs poor technique, you will develop the same habits, just like the pilot who didn’t properly check his brake lines. Instead, you should find those who are better than you and help you improve, and spend your time with them.

Life is too short to be surrounded by those who bring you down, whether they are bad pilots or bad influences. Seek out those who make you better.

One Reply to “Roldanillo, Colombia [Paragliding]”